Medicare Part B providers throughout the country should be actively preparing to have their performance graded by the new Merit-Based Incentive Payment System starting next year. The scoring system -- which is calculated by combining three existing CMS qualitative measurements and one new one under a single roof -- will reward the highest-scoring physicians with incentives of up to 4 percent of Part B baseline payments starting in 2019, while the lowest performers will pay fines of up to 4 percent of Part B.


The performance program comes as a result of the passage of the Medicare Access and CHIP Reauthorization Act (MACRA) that was signed into law in April 2015. While the law abolished the highly unpopular Sustainable Growth Rate adjustments, it also created a new learning curve by introducing MIPS.

In essence, MIPS continues the move away from fee-for-service billing and toward bundled or value-based Alternative Payment Models by offering substantial incentives to providers already participating in APMs and exempting a handful of "qualifying providers" (QPs) who receive a certain percentage of patient payments through APMs that already base payments on quality metrics comparable to MIPS. Providers determined to be QPs by CMS will earn a 5 percent lump sum bonus payment each year from 2019 to 2024 and will receive a higher Medicare fee schedule in 2026 and in future years, meaning MIPS eligible providers (EPs) should be taking a hard look at how integrating an APM could put them ahead of their peers.

The program also does not apply to first-year Medicare participants, providers that do not meet the low volume threshold or hospitals and facilities, according to CMS.

While the majority of Part B providers will be subject to MIPS, the system won't start tracking performance until 2017, meaning there's still time to prepare for this major shift. Once installed, MIPS participants will be able to earn a maximum of 100 points annually across four categories: meaningful use of EHR (25 points), quality measurements/PQRS (30 points), resource use determined by the Value-Based Payment Modifier (30 points), and clinical practice improvement (15 points). 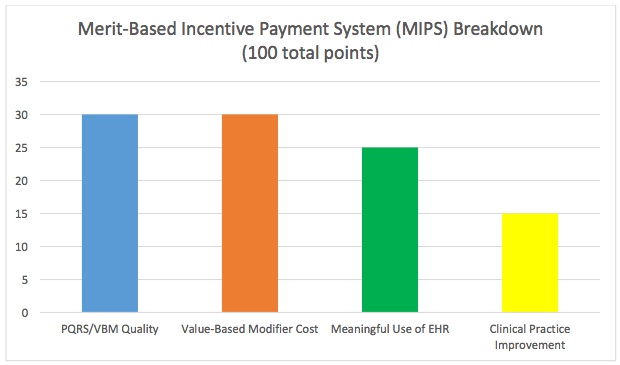 But exactly how are points in each of these categories earned? Good question. That information won't be released until CMS unveils its final MIPS rules sometime this fall. However, a draft of the rules that should give some insight into the scoring process is scheduled to be released this summer.

Since how each of MIPS four categories will add up to make a whole is still a mystery, here is a quick refresher on the key points of each performance measurement:

Each year, a baseline threshold for performance will be defined by CMS. So, if the agency chooses to set the benchmark at 55 points, a score of 56 would earn a slight incentive, while a score of 54 would net a slight penalty. The bonuses and penalties increase as the provider's score moves further from the baseline score.

Here's the rub: CMS designed the program to be budget neutral, meaning incentives will be drawn from the same pot low performers pay into. But, that doesn't mean there will be an equal number of winners and losers, as evidenced by the fact that CMS is including a "scaling factor" to multiply performance bonuses by in case incentive payouts don't initially match the penalty fees taken in. That scaling factor is currently capped at "3", meaning a provider could earn up to a 12 percent bonus (4%*3) in 2019 if enough EPs don't meet the baseline performance threshold. The adjustments are set to increase each year through 2022 when they will be capped at +/- 9 percent -- with the conversion factor allowing bonuses to reach a maximum of 27 percent.

This move represents a significant deviation from the existing EHR Meaningful Use and VBM programs where providers can avoid penalties by scoring within a large median range. MIPS ensures providers throughout the country will be forced to compete with each other for the same dollars.

Financial implications aside, it's also important for physicians to note their MIPS score will be publicly listed on the CMS Physician Compare website, meaning the score could have a direct effect on how patients view various providers. While it will likely take patients some time to become familiar with exactly what a MIPS score quantifies in relation to the quality of their provider, there's little doubt a negative score could impact a physician's perceived quality in the eyes of his/her patients.

Still, there are numerous details that must be ironed out by CMS before MIPS launches next year. These include determining the process for reporting data to CMS and ruling on whether providers will be allowed to earn partial credit in the MIPS categories. There is expected to be at least a two-month window between the release of the final MIPS rules and the launch of the program in January 2017, which will leave EPs scrambling to adjust to the rules on the fly. Vachette and Stark will work with their clients to ensure compliance in preparation for MIPS.

Providers attempting to prepare for MIPS should be realistic about the challenges of adjusting to a new performance measurement and attempt target the components of the system in which they are most accomplished and are performing well. While it may be difficult to score well against peers in all four categories, physicians can outperform others and reach the baseline performance threshold by emphasizing strengths and minimizing weaknesses.

It's also key to ensure existing performance programs are being managed in concert with one another - both to effectively manage administrative costs and understand the demands this could place on your EHR system.

Terms of Use:
All rights reserved. No part of this report may be reproduced or retransmitted in any form or by any means, electronic or mechanical, including photocopying, recording, faxing, emailing, posting online, or by any information storage or retrieval system, without written permission from the Publisher.

All trademarks and brands referred to herein are the property of their respective owner.

Legal Notices:
While all attempts have been made to verify information provided in this publication, neither the author nor the publisher assumes any responsibility for error, omission or contrary interpretations of the subject matter contained herein.

The purchaser or reader of this publication assumes responsibility for the use of these materials and information. Adherence to all applicable laws and regulations, both federal and state and local, governing professional licensing, business practice, advertising, and all other aspects of doing business in the United States or any other jurisdiction, is the sole responsibility of the purchase or reader. The author and publisher assume no responsibility or liability whatsoever on the behalf of any purchaser or reader of these materials.