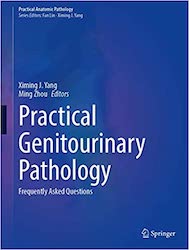 
Board review style answer #2
A. Fulminant hepatic failure in the setting of drug toxicity