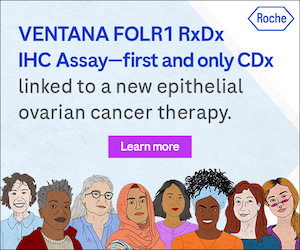 Section of the ovary

Ovary in a newborn female

The image above represents a section of a well circumscribed, yellow, cystic nodule seen on gross examination of the ovary. The cells are positive for inhibin and calretinin. Which statement is correct?


Board review style answer #1
C. The image represents a mature corpus luteum, which is a physiologic structure present in the luteal phase of menstruation. The constituent cells are polygonal with abundant, pale, eosinophilic cytoplasm representing the luteinized granulosa cells. The round nucleus contains 1 or 2 large nucleoli. These cells usually stain similar to steroid hormone producing cells and are typically positive for inhibin and calretinin.

Reference: Ovary - Anatomy & histology
Board review style question #2
Which of the following microscopic findings in an ovary are indicators of a pathologic condition?


Board review style answer #2
C. The description is that of a serous neoplasm. Complex architecture including hierarchical branching and tufting of lining epithelial cells should not be seen in normal ovary or in the context of endosalpingiosis.