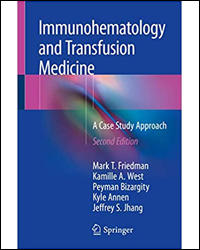 A 10 year old boy diagnosed with acute lymphoblastic leukemia with several relapses is on a clinical trial for CD19 CAR T therapy. He develops the rapid onset of flu-like symptoms, including fever, and progresses with mental status change and clinical concern for cytokine release syndrome. What would be an appropriate treatment for suspected cytokine release syndrome?

In which function of CAR T cells does the engineered T cell travel to the site of tumor cells targeted for destruction?


Board review style answer #2
E. Trafficking is the first function of a CAR T cell. The engineered cell must be able to travel to the site of the target tumor cells.