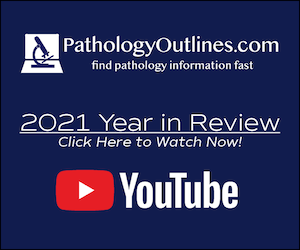 A 59 year old man presents with cough, hemoptysis and shortness of breath. A mass in his left lung was biopsied. Which of the following statements about this disease is true?

Board review style answer #1
C. The H&E stain demonstrates a micropapillary pattern, which is a poor prognostic factor. Lung adenocarcinoma is associated with exposure to radon, not benzene, and is typically found in the peripheral regions or upper lobes of the lung. This cancer is also more common in women than in men and most frequently metastasizes to the brain, not the liver.

A 63 year old woman presented with mass in the upper lobe of her left lung with enlargement of the mediastinal lymph nodes. Surgical biopsy shows columnar tumor cells with abundant intracytoplasmic mucin in an acinar growth pattern. The malignant cells are most likely to be positive for which of the following mutations?


Board review style answer #2
E. KRAS is the most common mutation associated with mucinous adenocarcinoma (76%). EGFR mutations are rare in the mucinous subtype. ALK, HER2 and BRAF are uncommon mutations overall.