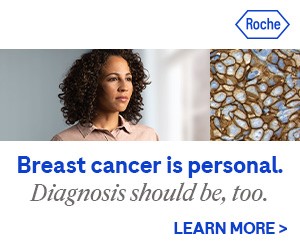 Board review style answer #1
A. DCIS is a nonobligate precursor lesion to invasive breast cancer. Molecular studies have demonstrated that low and high grade DCIS are genetically distinct biologic entities. DCIS most often presents mammographically as microcalcifications. Per ASCO/CAP guidelines, currently the only recommended biomarker for DCIS is estrogen receptor, while testing for progesterone receptor is optional. Unlike for invasive breast carcinoma, HER2 is not assessed in patients with DCIS only as anti HER2 therapy is not indicated. Sentinel lymph node sampling has a role in subset of DCIS only patients, the reported positive rate is 0.4 - 13.7% (mostly isolated tumor cell deposits and micrometastases) presumably due to missed or undersampled invasive disease. In the National Surgical Adjuvant Breast and Bowel Project (NSABP) B-24 trial, tamoxifen reduced the likelihood of ipsilateral recurrence at five years from 9 - 6%, and also reduced the risk of a tumor in the contralateral breast. (J Clin Oncol 2014;32:1365, Lancet 1999;353:1993)