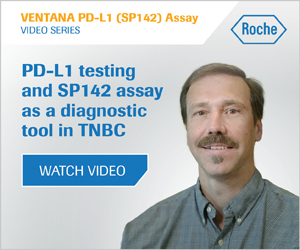 A 45 year old BRCA+ woman with a history of estrogen receptor positive primary ductal carcinoma of the breast cancer 5 years ago now presents with ascites and omental caking. Peritoneal biopsy shows a high grade malignant neoplasm with glandular and papillary features. Given the history, an initial panel of breast biomarkers is performed. The tumor is strongly positive for estrogen receptor and progesterone receptor and is negative for HER2. What panel of additional immunohistochemical stains would be most useful in the diagnosis?

Board review style answer #2
D. Given the clinical presentation, hormone receptor positivity and history of BRCA mutation, a metastasis from a gynecological primary (e.g. ovarian carcinoma) is the main concern. The most appropriate immunohistochemical stain panel would include PAX8 and WT1.